"This heartfelt and revealing autobiographical installation [by] Joie Rey Cohen is autobiographical [and] touches not only on deep personal feelings and emotions, but also on politics, religion, gender, sexuality and more. It is rare to get such an all-embracing a sense of another human being." ArtBusiness.com 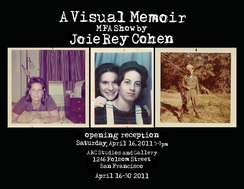 SAN FRANCISCO, California – Monday, February 28, 2011 – California Institute of Integral Studies (CIIS) MFA in Creative Inquiry and Interdisciplinary Arts presents A VISUAL MEMOIR, created by Joie Rey Cohen.  A VISUAL MEMOIR engages in dialogue about family dynamics.  The personal is made universal by the weaving together of vernacular photography, text, and patterns from the 1970's, ultimately illustrating the relationship between thought process, memory and details.

ARTIST BIOGRAPHY
Joie Rey Cohen (visual artist / photographer), Joie Rey Cohen is a Working Class, Genderqueer, Jewish visual artist who changes their pronouns as often as their underwear.  Joie has been creating layered identity-based portraits for over twenty years and is currently visually preserving memories, by engaging dialogue with images, text, and patterns.  Joie has shown work in England, Australia, and at 3 universities in the U.S.  Having grown up with family members on both sides of family working in the “Schmatta Business” (Garment District) on 7th Avenue in Manhattan, Joie makes the personal universal by weaving together vernacular photography with text and patterns from the 1970's.  Joie obtained a BA in Humanities and Gender Studies from the New College of California, and will complete an MFA in Creative Inquiry and Interdisciplinary Art from California Institute of Integral Studies, May 2011.  Joie lives in the Tenderloin in San Francisco.

The MFA department at CIIS presents A VISUAL MEMOIR, a preservation of memories, engaging in dialogue about family dynamics.  The personal becomes universal, as Joie Rey Cohen weaves together vernacular photography, text, and patterns from the 1970's, illustrating the relationship between thought process, experiences, and details. 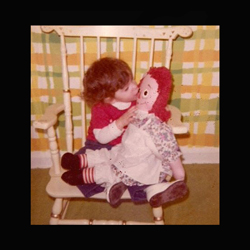 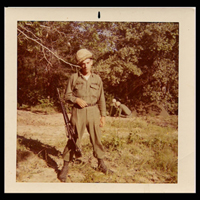